What Age Can You Retire With Full Benefits? 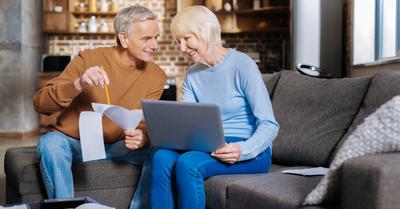 As we get closer to retirement, many of us wonder at what age we can retire with full benefits, which is an important question to ask ourselves.

Social security benefits make up a large portion of many people’s retirement nest egg, and knowing how much you will receive and at what age is going to weigh heavily on some of the decisions you may make later in life.

Planning for retirement can be complicated, especially when the laws and regulations seem to constantly be changing. Since most of us will rely to some extent on social security benefits after we retire, understanding how they work and when we can receive the most optimal amount is worth taking the time to explore.

I am nearing the age of retirement and have spent a good deal of time navigating the somewhat complicated process of deciding when I should begin claiming my social security benefits. Hopefully, the information I’ve gathered will help you do the same in an easy-to-read and straightforward way.

‍What Age Can You Retire With Full Benefits?

In 1935, then president Franklin D. Roosevelt enacted the Social Security Act as part of the New Deal after the Great Depression of the 1930s.

The idea was to give older Americans a form of “social insurance” to guarantee they would not be left penniless if another depression era was to occur in the United States.

As Americans live longer today than they did then and the workforce has grown to include more women and minority groups, we have witnessed plenty of adjustments to social security, including when a person can receive benefits, how much they will receive, and changes in tax implications.

For example, if you were to retire in this day and age at the age of 62 years old, you can receive some social security benefits, but you won’t receive your full benefits. That will affect your payout for the rest of your life.

On the other hand, if you wait until later in life, you may be eligible to receive more benefits than your full amount.

Let’s look more closely at what you can expect when you retire, and what age will allow you to receive your full social security benefits.

Even though benefits are subject to the government’s rules, and will at times be adjusted, a good place to start in determining your benefits is with your birth year.

Currently, for Americans who were born before 1960, they can begin taking their full social security benefits when they turn 66 years old.

Let’s say you were born in 1959. You would be able to technically begin collecting your full retirement benefits at 66 years old and 10 months.

If you were born in 1958, however, you can begin collecting your full benefits when you turn 66 years old and 8 months.

For those born in 1957, your benefits begin the day you reach 66 years old and 6 months.

Now you probably get the picture, but if you need more clarification, there are some great charts on the social security website, as well as ones like this one that will continue to give more details about when you can collect your full benefits and more details explaining the way the system is set up.

For those Americans who were born in the year 1960 or after, the current regulations are less complicated than those for older Americans. At least as of right now.

Anyone who was born in 1960 or after that year will be able to receive their full retirement benefits starting when they turn 67 years old.

Therefore, anyone who was born in 1960 is 62 years old right now, in 2022. That means that someone who is 62 today will have to wait five more years (until 2027) to begin to receive their full retirement benefits.

As I mentioned earlier, that same 62-year-old could begin collecting social security right now, under the current laws. But, they would collect their social security benefits at a reduction of up to 30% of what they would have received if they waited until they were 67 years old.

For some people, waiting may not be an option.

If a person’s health is poor and they don’t expect to live well into their retirement years, or if their financial situation is such that they need the money now, even at a reduced amount, being able to begin collecting that money at 62 years old may seem wise.

That said, the longer you can wait to collect your benefits, the more money you will be guaranteed throughout the rest of your retirement years.

Most financial experts will encourage their clients to wait as long as they possibly can before they sign up to begin receiving their benefits, since the long-term payout is much more desirable for a solid financial future.

Finally, now that you understand the process for being able to receive your full financial benefits from your social security payout, let’s look at what happens if you are in the enviable position of being able to wait even longer.

It is estimated that, in 2022, the United States government will pay out an average of $1,657 a month to qualifying retirees. This amounts to billions of dollars that are being paid out over the course of one year!

It makes sense, then, that the government would like to incentivize Americans to begin collecting their social security payments later in life, in order for the government to be able to use those dollars for other services and investments as long as possible.

By being willing (and able) to elect to begin collecting your social security until you turn 70 years old, you are allowing the government to hang on to those dollars for several more years before they have to add you as one of the more than 60 billion individuals who they will have to send a check to every month.

If you can wait to begin collecting those checks until you turn 70 years old, you may see a significant difference in your overall retirement benefits.

For example, the person who is eligible to receive that average amount of $1,657 a month could see that check grow to being around $2,071 if you can wait until you turn 70 years old, an increase of about 25% over your original full benefits.

Again, for many of us, waiting an additional few years to begin receiving those benefits may not be possible. Most Americans are not able to save as much as they would like, and are counting on social security to begin supplementing their income long before they turn 70 years old.

But, as you can see from my numbers above, over the course of a couple of decades (for those of us lucky enough to live that long!) waiting to collect your benefits can make a big difference, especially as you grow farther into your golden years and those government checks continue to show the larger benefit amount if you were able to delay receiving them just a bit longer.