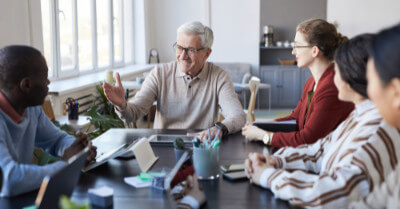 After retirement, many seniors wish to travel, but traveling abroad presents the challenge of communication. You may wonder if it is possible for older adults to learn a new language.

Conventional wisdom says, “You can’t teach an old dog new tricks.” People have long thought that as we age, our ability to learn new information declines. While learning something new as a senior citizen does present some challenges, it is very possible for you to continue learning at any age, and this includes learning a new language. Learning a language has many benefits for senior citizens and may be simpler than you think.

I have read many accounts of seniors who have learned new languages and talked to some in person. I have looked at scientific research regarding the challenges and benefits of language learning for older adults. I am strongly convinced that learning a new language can be a successful and meaningful endeavor for many senior citizens.

‍Is It Possible To Learn A New Language In Old Age?

There has been some debate among scholars regarding whether there is a critical age for learning a second language. However, in recent years, that proposition has been debunked. According to Dr. Catherine Snow, professor at Harvard’s Graduate School of Education, there is no limit on language learning in terms of age. She has found that there is no aging process that makes older language learners function any differently from those who are younger.

Neurological research has found that neuroplasticity, or the ability to call on other parts of the brain to compensate for others, continues to be present in senior citizens, meaning adaptation and learning are possible. In addition, neurogenesis, or the ability to create new neural connections, continues even into very old age. This means that seniors are able to learn even information that they have never been exposed to before. The human brain is constantly evolving, and more learning leads to more brain development so that new information can be retained.

What Are The Benefits Of Second-Language Learning For Seniors?

Many senior citizens are concerned about cognitive losses and the possible onset of dementia in the later years. One great way to slow cognitive decline and prevent the onset of dementia is learning a new language. An Edinburgh University study of 648 Alzheimer’s patients found that those who were bilingual had an average age of onset 4 ½ years later than those who were monolingual.

Language learning also increases cognitive reserve. All human brains atrophy, or shrink, with age, but the brain can continue to function very well if you have a large cognitive reserve. Senior citizens learning a new language have been found to have increased executive functioning skills, which helps with attention, planning, organization, and problem solving. The American Academy of Neurology states that code switching (translating from one language to another in your mind) activates executive functioning and delays cognitive decline. In fact, they recommend starting new language learning after age 50 to attain the greatest cognitive benefits.

There are social and emotional benefits for seniors who choose to learn a second language, as well. Some take language classes, which allow them to connect with others pursuing similar goals and decrease isolation. Learning a new language improves self-confidence and gives people a feeling of well-being, which can have great impacts on emotional and even physical health. Interestingly, because people who learn a second language need extra time to interpret meaning in their second language, it decreases emotional responses to language and allows for more rational, reasoned decision-making.

Travel is, of course, a common reason for seniors to pursue learning a new language. If you have more time to travel following retirement, you may find yourself wanting or needing to learn a second language. The benefits here are clear - increased ease of communication in a new location, improved safety, and a better understanding of the culture you experience.

Finally, there may be professional benefits to learning a new language for seniors who remain in the workforce. Bilingual speakers are more marketable in most every profession, and speaking a second language will give you an advantage over coworkers when it comes to salary, promotions, networking, and international travel.

There are clearly many benefits of learning a second language later in life. As a senior citizen, you might see the positives clearly but be concerned about the challenges of second-language learning.

What Challenges Are There For Older Language Learners?

We know that cognitive changes during normal aging will not prevent you from learning a new language. So what challenges might you face?

Part of normal aging are changes to short-term memory. This might be daunting when you think about learning a new language. However, while it is true that senior citizens may have more difficulty with memorization and rote recall, most have found other ways of learning and retaining new information, such as making associations and learning from context rather than just remembering. Normal memory issues should not prevent you from learning a new language.

Sometimes physical concerns impact language-learning ability, such as hearing or vision loss that may come with aging. There are many ways to compensate, such as wearing hearing aids or glasses, using assistive listening devices, and using different modalities of learning, so that hearing or vision issues do not impair your ability to learn a new language.

Perhaps the largest challenge for many seniors to overcome is self-doubt. Your family and friends may buy into the idea that older people cannot learn such complex new information. However, we know this is a myth, and with time and effort, you can learn a new language.

What Advantages Do Older Language Learners Have?

Some studies say that it is not only possible for older adults to learn a new language; it may even be easier for them than their younger counterparts. A 1987 study by Mary Schleppegrell from the University of Michigan found that age is not a factor in language learning decline, and that because older adults have better communication skills in general, younger students take longer to learn a new language than seniors.

Schelppegrell indicated that studies show that building the ability to communicate in a second language may actually be easier for older adults, and happen more quickly. Researchers believe this is because older adults have a good understanding of language rules, large vocabularies, and the ability to build meaning from context.

In addition, most older adults have spent their lives working and/or managing a home and family, so they have discipline and the ability to manage scheduling the practice time necessary to learn a new language. They are also experienced learners, so seniors understand their personal learning styles and how they can understand and retain new information most efficiently.

How Can I Go About Learning A New Language As A Senior Citizen?

There are so many options for senior citizens who want to learn a new language. Many apps and computer programs offer fun and interactive ways to practice vocabulary, grammar, and syntax in a second language. Technology makes learning easier, structuring it for you and helping you progress through what you need to learn.

It is important to use multiple modalities for the most effective learning. It is a great idea to take a class or work with a tutor for in-person instruction. Libraries offer CD’s to assist with language learning practice. You can watch movies in another language with subtitles, or turn the subtitles off for an extra challenge. Reading materials are widely available on the Internet or at your local library to practice, and there are flash cards for most languages available for purchase online.

Research also shows that new languages are best learned when you start practicing right away, and consistently. Don’t just practice vocabulary - use words in sentences, even if you’re not quite sure of the entire meaning. Getting familiar with the sentence structure and grammar is important alongside vocabulary, but the most important goal is simply effective communication.

For all second-language learners, including senior citizens, the best way to become fully fluent in a new language is to immerse yourself in the language. If you can, move to a spot where the language is used all the time, or take an extended vacation there. If that is not a possibility, surround yourself with the language you wish to learn as much as possible, and find conversation partners to practice your comprehension and use of your second language.