Can Senior Citizens Learn To Code? 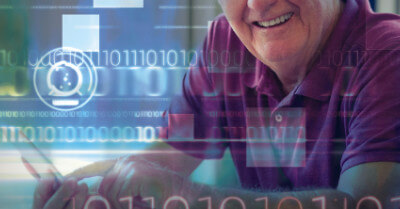 Can senior citizens learn to code? Learning how to code can seem like an intimidating challenge for people of any age.

Some senior citizens believe they may be too old to learn how to code, but that’s simply not true. There’s no upper age limit to learn computer programming. It just takes the willpower to learn and time to focus on acquiring a new set of skills.

Many people are nervous about changing their careers after a certain point in their lives, but they also find themselves bored of their current job duties and interested in a change. It doesn’t help that popular culture and social media often depict outdated stereotypes of older adults who can only type slowly with great effort and are too confused to navigate handheld devices and computer menus.

But one U.S. National Council’s Committee on Aging researcher countered these stereotypes by pointing out that life expectancies are increasing while infirmity is decreasing, resulting in the fact that many adults are aging better than ever. Some statistics indicate that people aged 50 and older now make up the largest group of technology users. And considering that technology is becoming ever more prevalent in our society, it only makes sense that job openings in software development are expected to leap by 22 percent between 2020 and 2030 alone.

‍Am I Too Old to Learn How to Code?

According to the U.S. Bureau of Labor Statistics, that’s a “much faster than average” growth rate. Still, those persistent stereotypes about the ability of seniors to adapt to new technology has many older adults questioning whether they are capable of learning how to code at a later stage in life. Some experts in the field believe this is absolutely an unfounded fear that should be discredited.

An article on the Columbia University website reports that older adults are just as capable of learning how to program as anyone else. It also states that around 1 million of the 45 million users on Codeacademy’s code learning platform were aged 55 and above. Who knows how much higher that number might be without negative stereotypes holding many senior citizens back from taking the leap to learn how to code.

Even those senior citizens who are retired can benefit from the mental challenge of learning computer coding. Many older Americans revel in the challenge of fixing broken items or solving puzzles, and coding can definitely scratch that figurative itch. Learning how to code can help senior citizens develop self-confidence in addition to learning new skills. Coding knowledge can also make individuals more marketable job candidates, even in cases where they don’t go into actual software development.

As far as ageism in tech goes, statistics show that older adults are rapidly embracing internet adoption in recent times. Vantage Aging reports that 67% of people age 65 and above now use the internet. And they’re holding their own when it comes to using forms of technology, too. Adults in this older age group use approximately 4.9 pieces of technology each week as compared to an overall average rate of 4.7.

Another negative stereotype that doesn’t hold water is that older individuals are less capable of learning new skills. According to Vantage Aging, the reality is that older workers enjoy higher training rates than younger colleagues and tend to retain new information longer. They’re also more likely to be reliable and punctual employees who call in sick less frequently.

What Are Common Reasons and Benefits for Older Adults Learning How to Code?

The reasons that senior citizens choose to learn how to code are as varied as any other age group. Some are driven by curiosity and the sheer love of learning. Others love problem-solving so much they want to shift into a career where they get paid to do what they so enjoy. Some are enticed by the prospect of increasing their earning potential. According to Indeed.com, software engineers can make an average salary of $114,383, as of October 23, 2021.

Furthermore, learning how to program can help older adults advance in their careers. Coding skills continue to be in high demand, and that need is only expected to grow over the next few years. Potentially decades! Some tech jobs provide a high level of flexibility, especially as remote work is becoming more acceptable.

Not only can programming jobs provide more flexibility, they are typically much less physically demanding. This can be especially appealing for older adults who may need to physically slow down a bit in their later years but are still just as mentally sharp. One woman chose to switch from unloading trucks and running multinational teams to computer programming because she knew she needed a change and enjoyed learning computer languages.

An article on the Seniors Guide website reiterates the fact that some seniors pivot to computer coding because their previous jobs just require too much from them physically. Still others may need a more flexible working schedule because they also act as caregivers for spouses or other relatives like grandchildren.

Computer programming is also an outstanding way to maintain mental acuity as you age. It requires a unique combination of both logical reasoning to follow the strict set of rules required and creativity to utilize those rules to achieve a vast number of potential outcomes. Computer programmers must both use analytical skills and come up with innovations to solve problems. This blend can definitely help senior citizens keep their brains actively engaged and as strong as possible.

How Can Senior Citizens Get Started Learning How to Code?

There are several options available for senior citizens who want to get started learning how to code. Many colleges now offer online courses for those who don’t wish to enroll in on-campus college education. This is a good choice for those who can afford to pay college tuition to gain new programming skills. It can also benefit those who either never earned a degree previously and need one to switch careers now or those who simply want an additional college degree.

A free option for those who may have less disposable income is to take advantage of one of the online programs offering free courses to the general internet public. These programs also tend to provide greater flexibility for adults who do better learning at their own pace. Other online courses may require payment, but could still be a cheaper route than paying college tuition.

A more intense but equally quick option is to enroll in a coding boot camp. These do require a significant time investment of 40 to 80 hours each week of in-person classes that usually run up to 15 weeks. Bootcamps can be a pricey option, so it’s important to carefully research that whatever claims the program makes as far as success and job placement rates go are authentic. Course Report indicates that around 10 percent of those graduating boot camp coding programs are actually older than 40.

The Aging Greatly website recommends two websites for tracking the claims made by coding bootcamp programs: The Council on Integrity in Results Reporting and Course Report. The first is a non-profit organization and the second provides both informative articles and useful tools as you consider which bootcamp course might best suit your specific needs.

Can Senior Citizens Who Learn to Code Switch Careers?

A New York Times article relates the story of one woman, Liz Beigle-Bryant, who made a career switch in her 60s thanks to coding. She learned marketable skills in CSS and HTML coding online and believes this contributed greatly to her obtaining what she calls a “dream job” as a document control coordinator.

Ms. Beigle-Bryant suffered a 2011 layoff from Microsoft, where she worked as an administrative assistant. She said that employers often make the mistake of assuming older job candidates will be inflexible and incapable of learning new things. Her success in learning new coding skills from Codeacademy helped foster a sense of confidence she was formerly lacking. She also believed those skills gave her “an edge” when she went after her new job.

The founder of Codeacademy, Zach Sims, is a firm believer that “tenacity and persistence” are two of the key character traits required to learn how to code. These are certainly characteristics that many senior citizens either possess naturally or have developed over the years.

One 71-year-old man retired from commercial piloting and later transitioned to a new career in programming. At first nervous about that transition, he now works as a software engineer for an IT services company and especially enjoys keeping his mind active by solving problems. The second income he’s now earning in this second career is another benefit.

As these two cases help illustrate, it’s certainly possible for senior citizens to not just learn how to code but to also switch careers later in life than some believe possible. Those older adults who love to problem-solve and fix things may benefit from researching methods for learning computer programming skills. Given that life expectancies are increasing while the tech job market is exploding, this can be a great avenue for older adults who are drawn to this field to pursue.