How Old Was Joe Montana When He Retired? 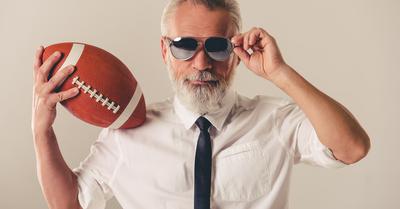 Anyone curious about Joe Montana’s age when he retired will find that the answer is easy to find, as are his reasons for leaving the sport of football.

As one of the biggest icons in football history, Joe Montana’s strength, skill, and resilience – not to mention unbridled talent – have left many wondering when he decided to leave his career and what some of the reasons leading up to it are.

Joe Montana retired from football when he was 38 years old, after 16 seasons of playing professional football, leading his team to 4 Super Bowl victories, making more than $25 million during his career, and sustaining a back injury that forced him to finally retire from the sport.

Following the career of an icon like Joe Montana can be particularly interesting to many of us, given his many record-breaking successes on the football field. But he is an inspiration to many of us off the field as well, as his long track record and late retirement are testaments to that.

I love football, and not just for the action and thrill of the sport. Digging into the backstory of some of the most famed players is a huge interest of mine, and I am always inspired by those who were able to have a long and successful careers. Let’s look more closely at Joe Montana and his late retirement from the game.

‍How Old Was Joe Montana When He Retired?

For most professional football players, making it to the NFL is a dream that few get to realize, and staying for more than a few seasons is even rarer.

As the average NFL player will retire after three to four seasons, to be able to maintain a spot on the field for almost two decades is practically unheard of.

Unless you are someone named Joe Montana.

Joe Montana began his career at the University of Notre Dame and was quickly drafted to the San Francisco 49ers shortly after graduation.

Though he played for San Francisco for years, his career actually ended with the Kansas City Chiefs. He was 38 when he retired his infamous throwing arm and hung up his cleats.

But that retirement came after years of jaw-dropping successes and for reasons that made it clear he was ready to retire.

As I mentioned earlier, Joe Montana’s professional career started in San Francisco, when he was quickly drafted to the team in 1979, straight out of college.

Though he was a third-round draft pick (and small for a quarterback), he quickly became the team’s first-string quarterback and continued in that position for fourteen years with the 49ers.

After an elbow injury caused him to have to sit out a season, he came back to play for the San Francisco 49ers but was eventually traded to the Kansas City Chiefs, where he played for two more seasons before retiring at the age of 38, making his total career span a total of sixteen seasons of professional play.

And to do that four times will make you a legend way after you retire from the sport.

Joe Montana is that legend. While with the San Francisco 49ers, he led his team to four separate Super Bowl victories, all within the span of eight seasons.

All four Super Bowl wins were while he played for the San Francisco 49ers. After his trade to the Kansas City Chiefs, Montana led the team to the AFC playoffs, where they were able to win their first championship game, though they didn’t make it to the Super Bowl.

3. Joe Montana Made More Than $25 Million During His Career

Retiring at the age of 38 may seem young to many of us, but not in the world of professional football.

And – especially not when you’ve made millions of dollars doing it.

During the course of his 16-season career, Joe Montana is estimated to have made $25.5 million through salaries, bonuses, and endorsement deals. His highest-paid year was in 1993 while playing for the Kansas City Chiefs. They reportedly paid him $4 million for the season.

Though $25 million is not a small sum of money, it is significantly less than what professional football players of Joe Montana’s caliber get paid today.

That said, retirement has also been good for Montana’s wallet, as he is now making substantially more money through book sales, endorsement deals, and his venture capital investment companies.

4. Joe Montana Suffered a Back Injury That Forced Him to Retire

Injuries are no strangers to most professional athletes, and many will continue to play, despite the pain they are suffering and the potential complications that may result.

Joe Montana was no exception to this.

In 1986, while playing for the San Francisco 49ers, Joe Montana injured his back and was told that the injury may be bad enough to force him to retire from the game he loved.

Instead, he came back to the field after three months of physical therapy and went on to play the game for another eight years, retiring from the Kansas City Chiefs in 1994.

Though he was able to gain significant success after that initial injury to his back, it eventually resulted in his retirement eight years later, at the age of 38.

Montana has many times gone on the record as saying that he had hoped to continue to play for at least a few more seasons, but the pain from his injury was too great, and he knew he couldn’t continue to push through it once his second season with the Chiefs came to an end.