‍After watching a priest serve the community for decades, one might wonder where a priest is able to live once they retire.

Retired priests can live wherever they so choose, and many decide to either continue to live on the parish’s grounds, buy their own homes, or move into retirement villas that have been exclusively designed for retired priests to be able to retire with dignity.

I’ve always been curious about where people retire - from those who decide to do something grand and adventurous, to those who choose a more humble and quiet lifestyle during their retirement years. Priests are a unique group of individuals, given their lifelong commitment to their profession, so understanding more about what their lives look like after they finish wearing their robes is a fun and interesting thing to explore.

The life of a priest is not necessarily an easy one. Making the choice to enter into the clergy is an enormous commitment and one that most priests will not take lightly.

In order to become a priest, several steps must be taken.

The first necessary step to achieving priesthood is to be a male who has been baptized and confirmed as a Catholic.

If a person wants to become an Episcopal priest, they can also be a female but must meet the other requirements of being baptized and confirmed in the Episcopal church.

In addition to this, they must possess a strong number of ethical and moral qualities, such as a strong faith in God, good emotional and physical health, the ability and desire to pursue something that is more than just a career but is an authentic way of life, and a level of maturity and readiness that proves they are capable of serving the church in this state for many decades to come.

They must also be between the ages of 20 and 55 years of age.

These moral and ethical qualities will be confirmed by a senior member of a person’s local parish (usually a bishop or other clergy member) to acknowledge that the person indeed has the qualifications to enter into the priesthood.

Once it is confirmed that these qualities are met, the person wishing to become a priest can then enter into the seminary, where most studies will last three to four years, depending on if the person is desiring a priesthood with a Catholic or Episcopal diocese.

At the end of their studies, a person is then given an exam called a general ordination exam (GOE) that will test their knowledge of the studies and training that they have received while in seminary school.

Those who pass this exam are given a master's degree in Divinity Studies and can now serve as a deacon for six months, after which they will be given a parish to either oversee or serve in a more minor priest role until a larger one becomes available.

For most priests, the call to the path is not just a career decision. It is truly a way of life.

Because of this, most priests are much older when they retire than the typical individual. For example, in the United States, retirement is usually between 65 and 70 years old.

For many priests, however, they will continue to serve their church and parish for long after that.

Knowing the length of service will be long, and they will be significantly older when they retire, let’s look at what type of living situations they have available to them when the day comes they are no longer serving behind the pulpit.

1. Retired Priests May Continue to Live on the Parish’s Grounds

Though it can vary from parish to parish, many priests will live on the grounds of the church where they serve.

Oftentimes there is a residence attached to the church that was built for this specific purpose.

Though this may not be as common anymore in the Episcopal faith, most Catholic priests will live on the church grounds, in part because they don’t marry and instead are attached to their parish family instead of having a traditional one of their own.

The living quarters on a church property are called the rectory.

Sometimes there is enough room at a certain rectory that a priest may be invited to stay indefinitely, even after retirement.

Most rectories in the United States don’t have enough room for this, as they will need to make room for a new priest upon his arrival.

But for those who do have multiple residences, it is not uncommon for the people of the parish to ask a well-loved priest to stay on, even after his retirement years have started.

2. Retired Priests May Decide to Buy Their Own Homes

Perhaps the most common retirement option for most priests - both of the Catholic and the Episcopal faith - is to purchase their own home after their retirement from the church begins.

Though priests are not considered to be high-wage earners, they will usually have a fair amount of financial security after their time at the pulpit is past them.

It is rare for a parish to not have set up certain pension plans for their retired priests.

Even smaller parishes will have set aside investments that are to be used for their retired priest’s personal expenses once they are no longer earning an income.

Though they are not usually extravagant, most priests will have a pension fund that can cover their living expenses and allow them to buy a home.

3. Retired Priests May Move into Retirement Villas that are Designed for Them Exclusively

Another common retirement option for many priests is to live in a retirement villa that has been built exclusively for them by their parish or the archdiocese in their area.

Priests don’t usually retire like the rest of us. Their parish has been more than just their job - it is a way of life, a commitment they made that is deeper than what most of us make to our employers.

Knowing that, many parishes across the country want to reassure their past priests that - even in retirement - they will be cared for, honored, and valued in the church community.

It’s become more common for parishes to build retirement-type facilities for past priests to reside in together.

The quarters are usually modest, but completely adequate, and they are almost always built in close proximity to the church grounds, allowing the retired priest to stay fully engaged with his church family. 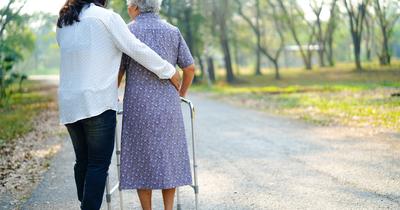